Inside the Arte Antica building, SPAZIO NOVECENTO means 1000 mq of versatility and elegance right in the heart of the historical EUR, two steps away from the city centre and well-connected with the “Grande Raccordo Anulare” and the Fiumicino Airport (FCO).A scenographic terrace makes the location perfect to welcome events all-year-round.

The project SPAZIO NOVECENTO is based on a very innovative concept for Rome: a location for events with a major component: versatility and adaptation for any special need or request.

Its technological equipment is well comparable to a real TV Studio making it possible any kind of customization and personalization thanks to our dedicated staff.

Spazio Novecento is the perfect location in Rome for your events. 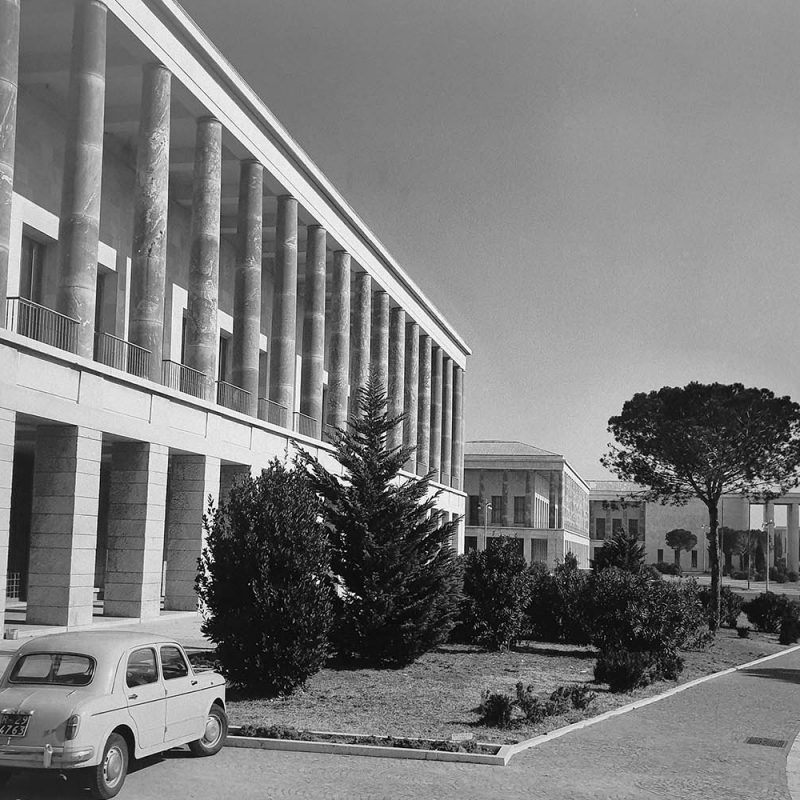 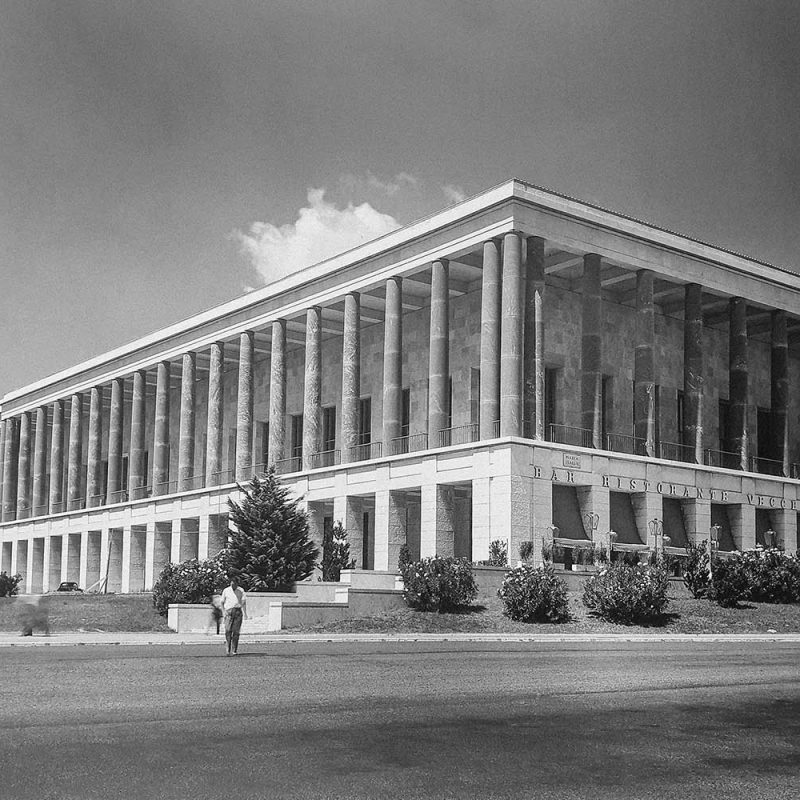 Spazio Novecento is located inside the Palazzo dell’Arte Antica, which was born more than 70 years ago out of the Rome Universal Exposition (Expo) project that was to host world excellence.

It was 1935, the 13th year of the Fascist era, when Rome’s governor Giuseppe Bottai proposed to Mussolini that Rome apply for the Universal Exposition.  The intent was to show the world the genius of Italian Civilization. The executive part of the gigantic program began on April 26, 1937, and among the buildings to be built was the Palazzo dell’Arte Antica, which houses Spazio Novecento. The Palace was built more than 70 years ago from the design that was to house world excellence to form the core of the exhibition review. In the intentions of the designers (F.Fariello, S.Muratori and L.Quaroni) it was supposed to represent a large agora, clearly classical in style, with a strong celebratory charge.

The Exhibition Hall is characterized by the presence on the second floor of a large full-height monumental hall, decorated by two pairs of columns made of highly prized portoro marble. Portoro or Portovenere marble is a fine variety of black marble from the La Spezia area. Its highly decorative appearance makes it suitable for artistic and fine achievements. Work, which began in 1939, was halted, however, due to the outbreak of World War II in 1942. In 1951 when the Ente Eur was established, the premises of the Palazzo dell’Arte Antica were in a state of abandonment and still being completed. From this date until 1956/57, work was started and completed, and the new Ente rented the ground floor premises to a commercial vocation, and the upper floors to international industrial companies advertising their activities. From 1967 until 2000, when Ente Eur was transformed into Eur S.p.A., the spaces on the first and second floors and a small part of the ground floor were conducted by the Italian-Latin American Institute. Starting in 2003 major renovations were carried out on the entire building, largely restoring the most representative rooms to their original configuration through an overall philological recovery. 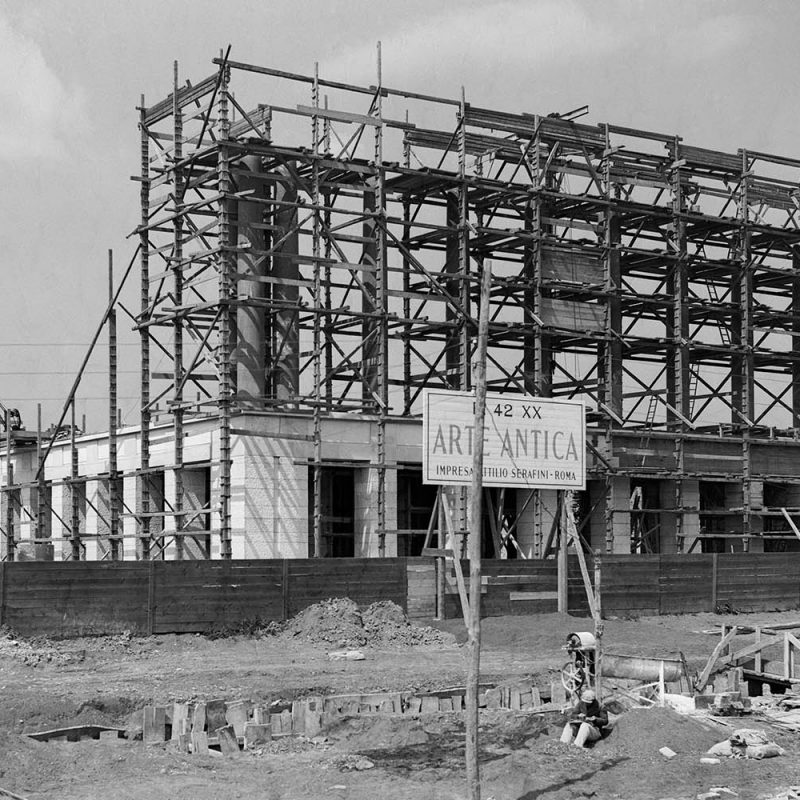 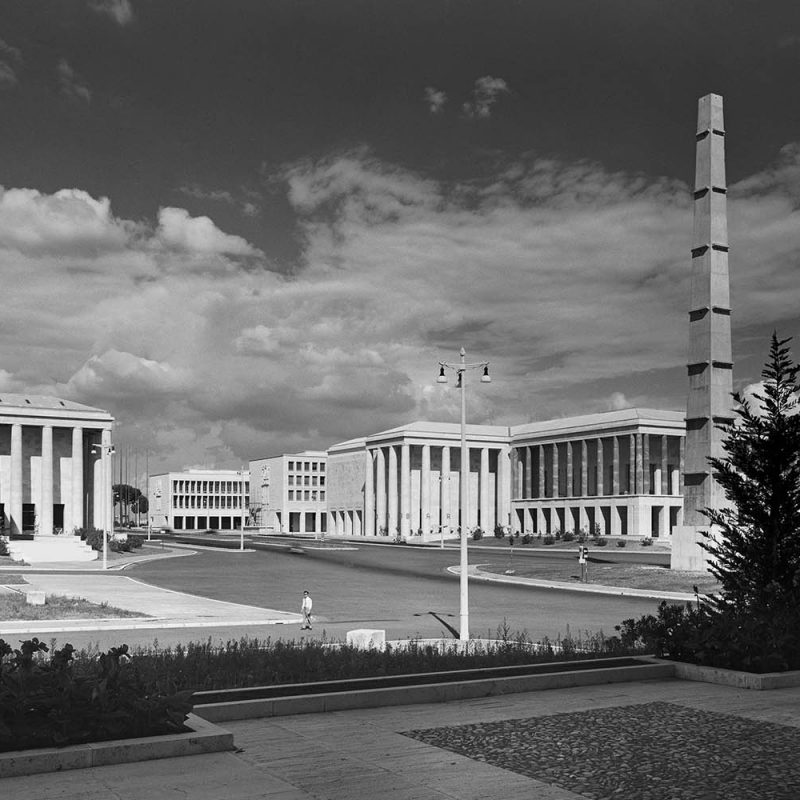 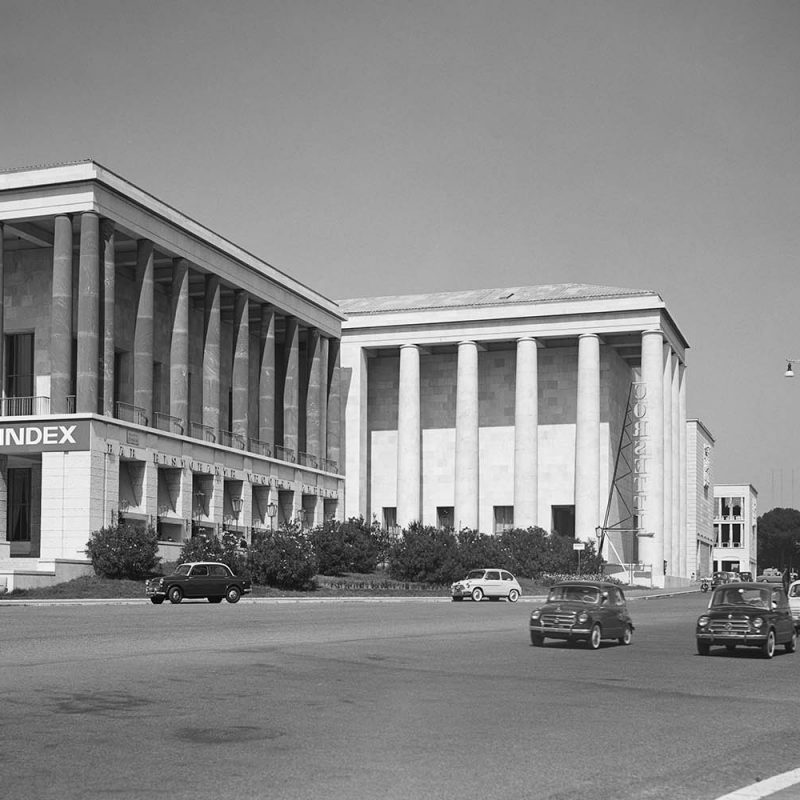 In 2006 the renovation of the building located in Guglielmo Marconi Square was completed. Spazio Novecento opens for its first inaugural event on March 17, 2007. Actually, the story begins two years earlier, when one of the two partners, Stefano Spezia, born in EUR and in love with the most modern district of Rome, decides to go to the offices of EUR Spa.

His desire is to check the possibility of realizing the new project of a revolutionary event location. The idea was to create a multifunctional space where he could host conventions, meetings, gala dinners, fashion shows, exhibitions, concerts and parties. All organized with its own staff and with the location’s spaces ready to be transformed by state-of-the-art furniture and technological equipment. The idea was presented to an executive of EUR Spa but was rejected. “Stefano you are still not thinking clearly. This project is not a restaurant, nor a convention hall, nor a disco. When you have clearer ideas we will talk about it again.”

But Stephen’s thoughts were something else: “My idea was just that, to embrace as many solutions as possible so that we can involve as many initiatives as possible in the most diverse business and professional branches.” Later, convinced of his own idea, Stefano returned to the Eur Spa offices where he found the roles in the upper echelons of the company changed. The new board of directors, composed at the time of CEO Mauro Miccio, was enthusiastic once they learned the details of the innovative project. 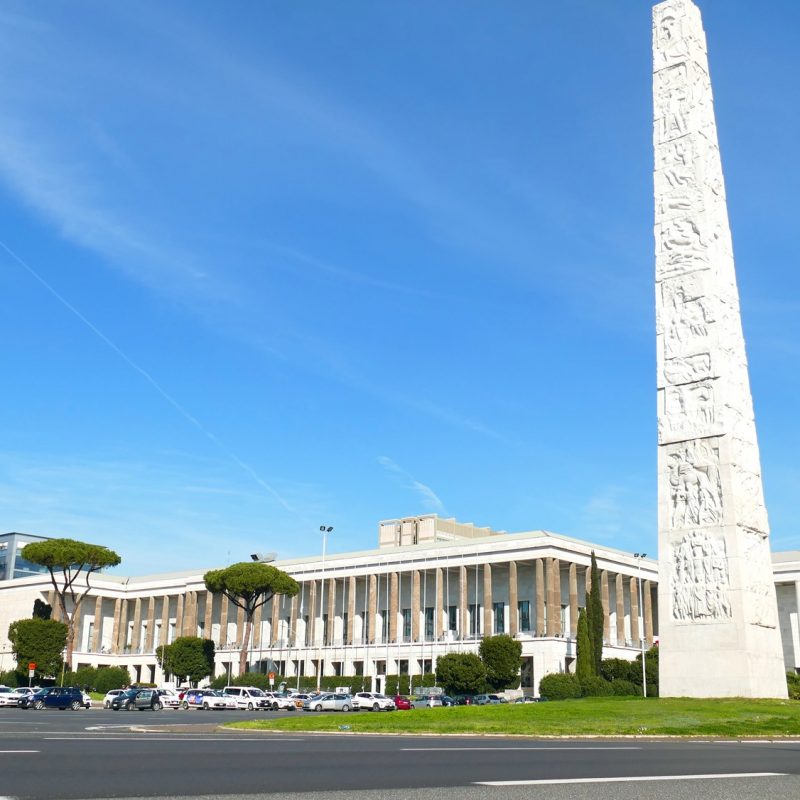 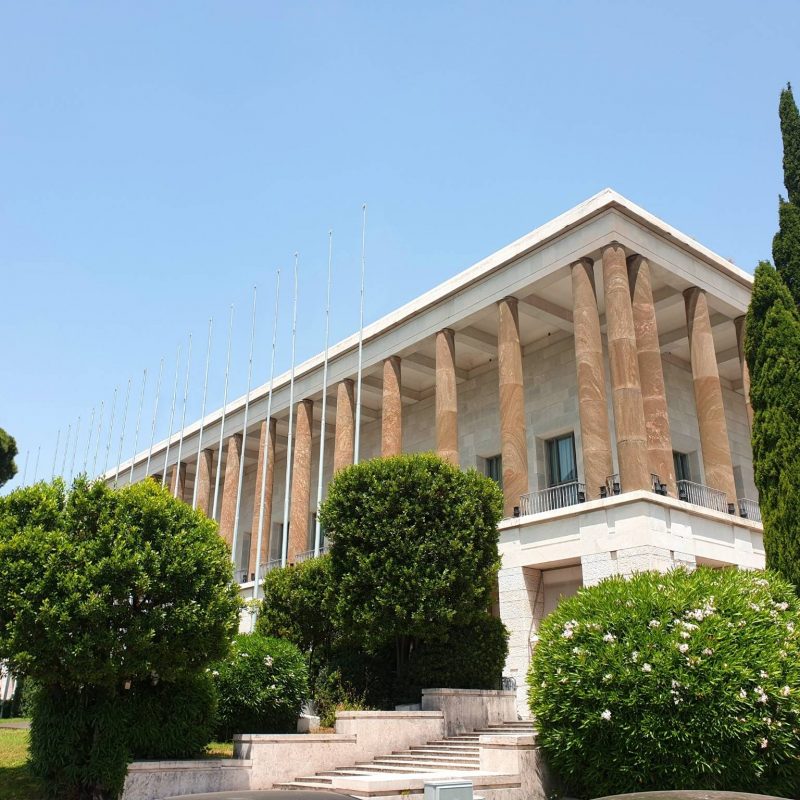 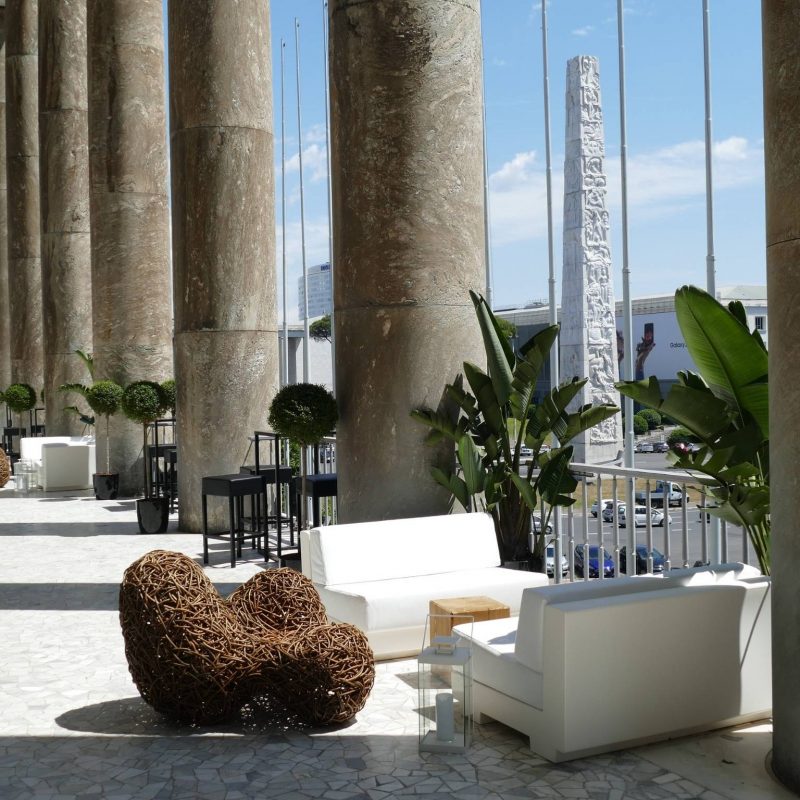 He was convinced that this idea could become a driving force not only for the entire Eur area, but for Rome itself. Believing and supporting the project, making changes and dispensing advice were Federico Haisberg and Massimo Arlechino: 2 members at the time who were part of the Ministry of Productive Activities. The first location identified for the realization of the project was the Salone delle Fontane, but it had already been leased. Alternatively, at that time, there was one of the historic buildings facing Guglielmo Marconi Square. Under renovation, the structure was the Palace of Ancient Art. Inside was a magnificent hall that, not yet having its own name, was christened the “Hall of Columns” for the occasion.

Stefano realized that the project had a great chance of succeeding and decided to call his friend Daniele Aprile. At that time Daniele was co-owner and Director of a well-known venue in the center of Rome. Stefano was aware that the combination could be extraordinarily positive for the outcome of the project.

When Daniele first saw the room, he immediately responded, “Where do I sign?” It was clear that he was absolutely unafraid of the challenge. From that day was born the union that joined in the name of Happy Days Eventi s.r.l. The name of the company was clearly inspired by the telefim that represented their youth. From there on there were several meetings over a period that lasted about a year and a half. These meetings were so long and wearisome that they were in danger of losing faith in the project. But through tenacity, determination, and enthusiasm, Stefano and Daniele finally managed to finalize a final agreement with the hall’s owner. At that point, in December 2006, construction and technological work finally began and the acquisition of the products needed for the project began.

Among the many important things to think about was choosing a name for the new location. With the cooperation of a communications company, the study of different names began. There were many proposals and the choice was decided together with friends of different ages. A dinner was organized where three names could be chosen out of 10 available proposals. Stefano and Daniele’s suggestions were to go for an “Italian” name, given the historical context where the location is located. Daniele’s idea was for a “space,” and considering that the building was built in the most significant period of the 1900s, we opted to combine these two words.

The name we decided on was SPAZIO NOVECENTO.

This website uses cookies to improve your experience while you navigate through the website. Out of these cookies, the cookies that are categorized as necessary are stored on your browser as they are essential for the working of basic functionalities of the website. We also use third-party cookies that help us analyze and understand how you use this website. These cookies will be stored in your browser only with your consent. You also have the option to opt-out of these cookies. But opting out of some of these cookies may have an effect on your browsing experience.
Necessary Always Enabled
Necessary cookies are absolutely essential for the website to function properly. This category only includes cookies that ensures basic functionalities and security features of the website. These cookies do not store any personal information.
Non-necessary
Any cookies that may not be particularly necessary for the website to function and is used specifically to collect user personal data via analytics, ads, other embedded contents are termed as non-necessary cookies. It is mandatory to procure user consent prior to running these cookies on your website.
SAVE & ACCEPT